I could #read it in her face – her sunken cheeks and her distant eyes. Her slackened jaw that once said, "I love you, sweetie."

Daddy will say she looked like an angel, but I will always know the truth.

The #bow yanked against Carol's violin, playing ear splitting whines that made every member of the orchestra grit their teeth.

"I #bow to your gift," the concert master winced, "I've never known a violin capable of the sounds it just made, until today." #vss365

The famed racer & seasoned #convict smirked at the smoking race tracks, unfazed by the fiery remains of the opposing team. "T-that wasn't an accident, was it?" The rookie grease monkey sputtered, in awe of how composed the mob lieutenant was. His answer was simple. "No." #vss365

Joe's every habit was #deliberate. How many ice cubes he preferred. Purchasing one pair of sneakers a year. His routine janitorial job. His entire life was a deliberation. So when Joe stopped showing up for work, everyone had the same thought on their minds. He was dead. #vss365

Joyce & Ronny watched the plume of smoke blacken the daytime skies. Birds squawked out from the path of destruction. Joyce looked down to Ron's still smoking hands & the #munted remains of their house. "I don't think you've got those powers until control just yet." #vss365

Grackle's iridescent wings, though they wink in the sun, become one with night every #eventide. Solemn protector of his home, I watch him disappear into the dark as he gaurds the gates where monsters more terrifying than he, await. #vss365 #myMC #amwriting

Ambriel searched for the Grackle, until she found him beneath the #downlight of the moon. Oblivious to her presence, he watched the sky with tears in his eyes. Who knew, that even beasts could cry. #vss365 #myMC #amwriting

Blaine #malingered in the shed while a storm of blood thirsty creatures flitted about the yard. He only had one job – to retrieve the fluid to light the torches. Instead, he hid away until the shed door tore open and Grackle tossed him out as a sacrifice. #vss365 #MyMC 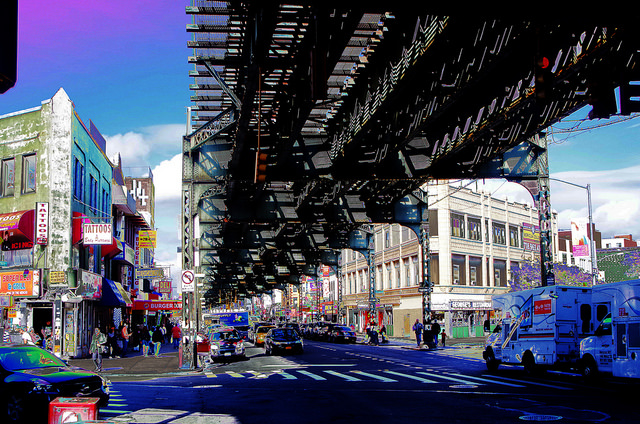 when I was peligrosa

and a saggin’ slim used to wink “What’s poppin’?”

on Stockholm and Wyckoff.

where stoops were sold out from Bedford to Halsey.

Before 358 Grove was whitewashed next to White Castle.

When I was rubia in the bodegas.

Willoughby used to “ey yo” me with a bottle of Bacardi while going limb by limb.

They rocked door knockers on Knickerbocker

and doors were knockin’ with “Dios te bendiga” damas

who called me nena and asked me to pray for knocked up primas.

when banderas marched on the wind.

Back when Jazzy Jazz and S&M had a quarter zoo.

Greene was in loving memory with a Woody Cartoon.

Before it caught Alzheimers and forgot it’s roots,

Bushwick used to hoot and holla.

Now Bushwick has forgotten all my monickers,

made me a stranger,

when it used to call me familia.

I actually wrote this one 2 months ago and was struggling with how to close the poem. Finally managed to wrap it up and found the motivation to update my poetry blog.

If you grew up in Bushwick in the 90’s/2000’s, then some of this may be familiar. When I think of my childhood, I think of all the Spanish speaking residents in the neighborhood, and the sounds of the language, the music. I think of summer bringing everyone outside to the streets, on the stoops, playing dominos, buying from the pidaqua stands and dancing. Sure, there were some dangerous sides to the neighborhood as well, but the culture was really something before gentrification swept in. I’ll never forget it…

I mourn for the ghetto.

A White Castle next to

I weep for rickety fences and rusted gates.

When the L train was yellow and grey.

Before they raised the rents.

Off the M, when there was salsa at Borinquen.

Oh, way back when

claimed a corner, taken a block.

over the May rising flocks.

They called me rubia,

before baristas and yoga gyms

Before history got wiped.

They call it gentrification.

I call it genocide.

An invasion, a regression, an infection

It once was wild, and brimming with pride.

Oh, Bushwick, I miss you.

The hermanos, the primos, the chachos, the homegirls.

It’s the worst deaf I’ve ever been.

The worse death ever experienced.

Where my people at?

I feel like a refugee, a survivor, a remnant.

I’m grieving for this place, for milk crates and domino games.

I sob for the mom and pop shops.

This place has changed too much and too fast.

Something’s breaking in my heart,

Been wrestling with these feelings and this poem for the last week or so. The neighborhood where I grew up has changed so much while I’ve been away – it feels strange. It doesn’t feel like home anymore. It feels like I’ve been gone too long, and now it’s too late. It feels like I took for granted something I’ll never have again. Sad part of growing up I guess.