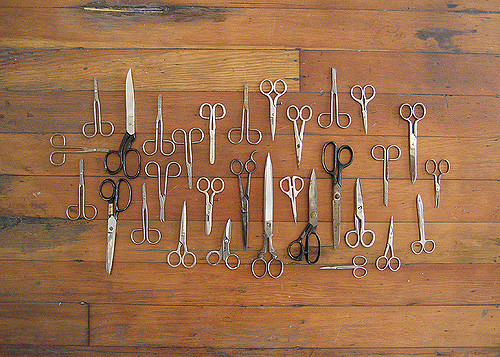 When you cut me from your life,

did you use scissors?

Did you cut carefully

from a thoughtless tear.

Maybe I was creased first

With the same soft swipes you’d use

to shoo dust off your loved one’s cheek.

I don’t feel you balled me in your fists before discarding me,

but I feel crumbled nonetheless.

Did you commit my calligraphy

Recalled our childhood and chronicled

held me to your heart,

before you severed us?

Whether you shunned me away into a

of your childhood knick knacks, waiting

for your hands to wrinkle to be

or tossed me into the same wastebasket

of shredded due dates and credit card offers,

I still have to ask.

Did you have the decency to use a pair of shears?

Once they said we were cut

from the same cloth.

Yet I still feel the ripping

Sometimes I want to hug a man I don’t know anymore,

but he’s still ripe in my nostalgia.

I can almost feel his boney frame encasing my own uncomfortably.

The closest to a brother I could ever have as a brother-less woman.

There was strength, ease, and most of all, no pressure. No innuendos. No assumptions. No judgement.

Just our branches tangling in a completely love smothered gesture.

Sometimes, I have this urge to hug him,

but I don’t know where he is anymore,

because I no longer know him.

There was no thoughtful process involved here. Literally wrote this up within the last few minutes and had to get it out of me. Knew a guy in high school that was like a brother to me – not sure how we lost touch throughout the years, but I’ve come to realization recently that I really, really want to see him again. And hug him. The last pictures I have of us together, we’re hugging.

I miss that tall skinny jock. Damn it…

Like tryna’ to catch water.
Could never win, no matter how much I fought her.

A pointless carousel, I watched it dissolve.
Those revolving doors,
couldn’t take it anymore,
as they took us round and round,
and I wound up a deserter.

Couldn’t pretend, couldn’t float on the deep end,
felt like an accessory to murder.

Whenever she defiled her worth, didn’t matter what she deserved,
but I couldn’t weather the rewind.

Had to repeat history, had to re-loop misery,
Couldn’t remain blind.

I tried to be hero, tried wise mediator.
Instead I became a powerless spectator.

Maybe my shoulders weren’t strong.
Like slow motion she willingly leaped off
into an ocean of sharks.

Like rolling under a the wheel of a truck.
Like running through a fire.
Poking an electric socket, she was dead set on drowning –
Wired.
No matter the life jacket, what advice she gets,
the only place she could live
were those thorny roads I abandoned.

When a part of you gets gangrene,
you cut it off.
There’s nothing more helpless
than loving one who doesn’t love herself.

And so I swept it under the rug.
Saved myself even though it hurt.
Had to release her from my clutch because I loved her too much,
and I was done being burned.

I once had a friend who was more like my sister. She was a part of me, but she was no good for me. And she was no good to herself. Sometimes when you love someone, you’ve gotta let them go. It’s one of the hardest decisions I’ve ever had to make in my life, and sometimes, I miss her… I hope she’s out there, and I hope she’s finally learned to love herself.